As the lunar July is coming, many Vietnamese families start to make preparations for the Vu Lan festival (Ullambana). It is also known as the Amnesty of Unquiet Spirits. After the lunar New Year (Tet) festival, this is the second largest annual traditional festival of Vietnam, and is celebrated by Vietnamese people participating in various religious rituals and humanitarian activities. 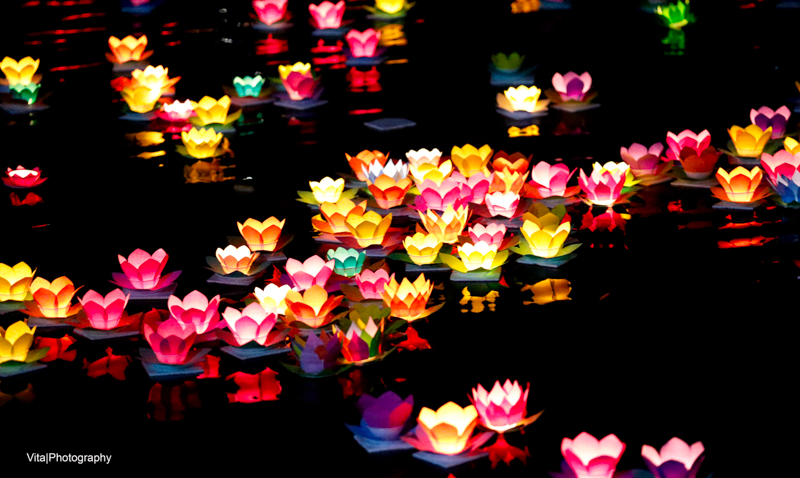 Ullambana or Bon festival, the Festival of All Souls in Mahayana Buddhism, is celebrated on the seventh full moon of the lunar calendar in many Asian cultures as a way of honoring the dead. On this day, souls are believed to return to their former homes. The origin of the Sanskrit name of the festival, Ullambana, is uncertain but appears in early Buddhist holy writings known as sutras.

The Vu Lan festival is an ideal and special event for foreign visitors who want to discover Vietnam’s culture, to experience and to understand more about Vietnamese values. Behind this very important festival, there is a legend of its origin and meaning which not all Vietnamese people know about.

The original idea of this festival is contained in the legend of Muc Kien Lien, one of the Buddha’s ten principal disciples. One day while meditating, he saw that his mother had been suffered from hell’s tortures because of evil actions in her previous life. She was starving, so Muc Lien Lien summoned all his spiritual powers to make a bowl of rice. Unfortunately, it burnt to ash before his mother could bring it to her mouth.

When returning to the physical world, he asked the Buddha for his help. The Buddha advised him to collect a group of monks and devotees to pray for his mother’s relief on the 7th full moon of the year. Their collective prayers proved to be so powerful that they released not only Muc Lien Lien's mother but also many other souls. Since then, the Vu Lan festival has been held on the 15th day of the 7th lunar month in honor of mothers and the gates of hell are believed to be opened to give the tormented souls 24 hour holiday (Wandering Soul's Day) at the same time.

The diversity of the Vu Lan festival can be seen throughout the country with many different activities. On this day, pagodas all over the country are swamped with Buddhists monks, nuns and devotees. They attend ceremonies and offer incense to the Buddha, hoping to wash away their sin, and they pray for their deceased relatives and living descendants. They will wear either a red rose if their mothers are alive or a white rose if their mothers have passed away. The rose has been a symbol of love and sharing among parents and their children regardless of social background.

Apart from praying at pagodas, people also offer votive papers, flowers, fruit, salt, sticky rice cakes, boiled cassava, sweet potatoes and many other things to their ancestors in the belief that the ancestors will hear their prayers and accept their offerings. However, the way people celebrate this festival is slightly different from the way people did many years ago. Low-income households prepare an assortment of food, incense, joss paper, and fake gold and banknotes, while those with more money might spend millions of dong on paper villas, luxury cars, electric fans, and air conditioners, hoping that their deceased relatives will enjoy the comfortable afterlife in the same way the living do. 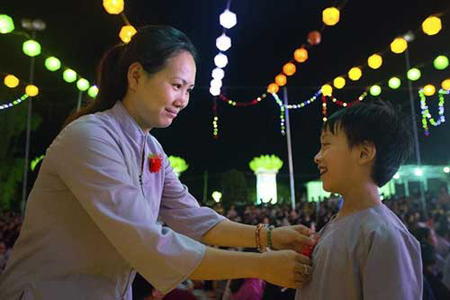 All in all, the meaning of Vu Lan festival is not only to commemorate the ancestors and worship for wandering souls but also to remind people of respecting what they have: their parents, family and relatives. While the Westerners have Mothers' Day to be proud of, Vietnamese treasure their seventh lunar month festival in general and the Vu Lan day in particular as a time to pay tribute to their loved ones, dead or alive.